In my previous post I alluded to something else that happened during my day with my amazing sister. I just had to share this wonderful adventure with you all.

As we were walking around downtown Charlottesville, I asked my sister to take a few pictures of my outfit for this blog. As we were taking pictures a young man, dressed very sharply I might add, introduced himself and asked if we had a minute. We of course were taking the day slowly so we had plenty of time.

The young, hip man (Robert) then let us know that he and his friend own a tailoring business, that he started, called Alter. The name of the business alone pulled me in and eventually Robert asked if either of us would be willing to model a one of a kind item of clothing that he made by hand.

I am emphasizing made by hand because the art of clothes making has been so lost. Robert shared that the whole reason he learned to make clothing is because people around the world are making cheap clothing for cheap labor and he knew that wasn’t right. Making your own clothing is about as simple and slow as one can get.

So, Robert let us know that he wanted to post the sweater for sale on their website but it just didn’t look right on the dress form. This particular sweater needed a human in it and I quickly agreed to be that human!

Rochelle and I walked with Robert to his tailoring shop (Alter) where we met his business partner Coogan and I modeled the sweater. On a side note: the sweater was the most comfortable thing I have ever worn in my life. I secretly wanted to buy it right then and there. I also have not been asked to say any of this at all, the sweater was just that comfortable.

I am now including pictures for proof of this special and super cool adventure. Coogan and Robert were extremely kind and hilarious people, it was so wonderful meeting them and getting to see their unique work space. 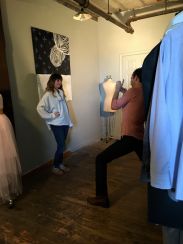 Coogan being a hilarious photographer 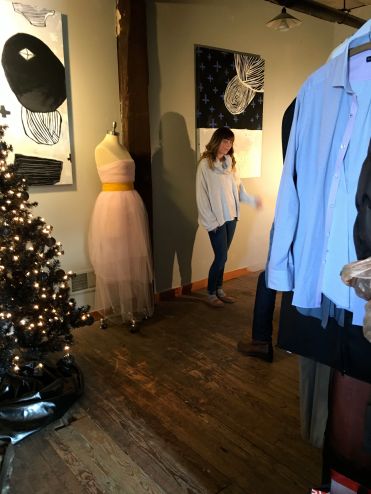 This experience was truly one of a kind and if I had never slowed down my life and started this blog, it never would have happened. Before slowing down and living more simply, my sister and I would have been “too busy” to take the pictures. We would have zoomed right past Robert. We wouldn’t have been living intentionally enough to participate. We would have been buying more of that “stuff” we thought we needed. Instead, we had an adventure.

Here is the final picture that is currently on the Alter webpage & store.